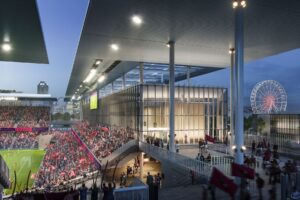 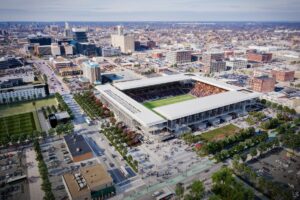 More than 900,000 craft hours of work have been completed to date

ST. LOUIS, MO – The construction team has completed the structural steel and pre-cast phases of the St. Louis CITY SC’s state-of-the-art Major League Soccer (MLS) stadium project. The final steel beam of the stadium’s superstructure was put in place last month by the joint venture of Mortenson | Alberici | L. Keeley (MAKjv) with Kwame Building Group as the construction project manager and ownership group representative. This milestone begins to integrate the stadium into the St. Louis skyline and the growing urban landscape in Downtown St. Louis. The concrete floors on all of the decks also have been placed, marking the end of the pre-cast phase.

So far, more than 5,326 tons, just over 10 million pounds, of steel have been incorporated into the stadium since the first steel column was placed in December of 2020. The project is the result of approximately one million craft hours to date. KWAME is serving an integral role including project planning and scheduling; value engineering and budgeting; selecting project partners and maximizing MBE/WBE participation; coordinating with the city and utility companies; and other project management.

“The local St Louis workforce and craftspersons are an exceptional team to work with,” said Nonyameko Waddell JD, Vice President at Kwame Building Group. “Even through challenges, they consistently demonstrate an unsurpassed commitment and a safety culture that is keeping this complex project on schedule. It is inspiring to see how far this collective team has come and we are excited for St. Louis residents, visitors, fans, and supporters to gather for St. Louis CITY SC’s first match in what is going to be an incredible addition to Our City.”

The next major phase includes exterior enclosure and interior mechanical, electrical, plumbing, and finishes. The construction team is currently erecting the highly visible canopy scaffold and continuing to work on the roofing, curtain walls, field lighting, speaker supports and metal panels for the new stadium. Underground utilities and foundation work for the fan pavilion is ongoing, while the early foundation work for the team’s new training complex is nearing completion. Within the next few weeks, the construction team will begin placing structural steel for St. Louis City’s state-of-the-art training facility.

ABOUT ST. LOUIS CITY SC
St. Louis CITY SC, one of the few majority female-led ownership groups in all of professional sports, was awarded Major League Soccer’s 28th expansion team in 2019. The St. Louis-based ownership group unveiled the club’s crest, logo and branding in 2020 and will take the pitch for their historic, inaugural season in 2023. Currently, St. Louis CITY is constructing an STLMade 22,500-seat world-class soccer-specific stadium, practice facility and team headquarters all within the same urban campus in St. Louis’ Downtown West District to create a 24/7/365 fan experience that is furthering St. Louis continued growth and revitalization. To stay up to date with St. Louis CITY SC stadium developments, visit STLCITYSC.com, stlCITYstadium.com and follow us on Facebook, Twitter and Instagram.

Want to join the discussion?
Feel free to contribute!

This site uses Akismet to reduce spam. Learn how your comment data is processed.